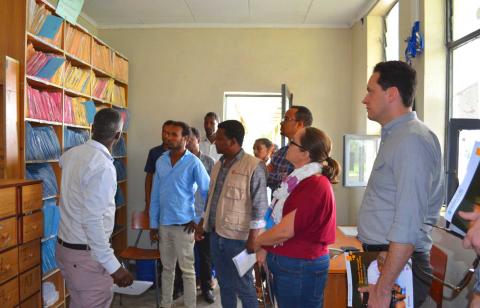 On September 24th, 2019, USAID Ethiopia’s new Mission Director, Sean Jones, visited Growth through Nutrition sites in Lume Woreda, East Oromia Region accompanied by a team of USAID and Save the Children staff. The visit was primarily aimed at introducing the project’s implementation at the community level.

Tade Health Center was among the sites visited where Nuredin Mohamed, Lume Woreda’s Health Office Head and Beleta Alemu, the Tade Health Center Head gave an overview of the activities Growth through Nutrition has been supporting through its Quality Improvement and Multisector Coordination activities in the district. Daniel Abbott, Growth through Nutrition Chief of Party, also gave an overview of the project’s approach to improve the nutritional status of mothers and young children and reduce stunting in four agrarian regions of the country.

Nutrition services such as Vitamin A supplementation for eligible children and nutrition counseling for pregnant and lactating mothers have improved immensely at Tade Health Center over the past year. Growth through Nutrition has established Tade Health Center into a model Primary Health Care Unit (PHCU) through various Maternal, Infant, and Young Child Nutrition and Quality Improvement trainings and continuous supportive supervision to promote improved quality nutrition services at the center as well as the health posts under its catchment and neighboring PHCUs. Nearly 16,000 under-five children were provided with Vitamin A and 2,500 pregnant women received antenatal care since May 2018.

Visitors were able to observe the center’s patient record-keeping system and pharmacy which have greatly improved using Kaizen 5s and Model for Improvement principles introduced to the center by Growth through Nutrition.

The USAID and Save the Children teams also visited a saving group supported by the project in Lume Woreda. Saving group members took turns describing the financial resource mobilization, improved household nutritional status, and well-being of their young children, among numerous other gains supported by Growth through Nutrition’s livelihoods and social and behavioral change communication activities. One mother described at length the difference she observed between her children, the youngest child having been targeted by the project. “My older child used to be sick frequently,” she stated “his younger brother is rarely ever sick. The older one appears short to me as well.” Growth through Nutrition has established 16 saving groups and provided nutrition sensitive agriculture support such as seeds and seedlings of fruits and vegetables, livestock and poultry for over 280 households in Lume Woreda alone.

The visit was closed with a tour of the home of Bizu Regasa and Shimelis Jambo who had built a chicken coop and raised five chickens, reared eight sheep, and grown kale, carrot, Swiss chard, and papaya in their homestead garden.

Mr. Jones thanked the community members for their hospitality and commended the Growth through Nutrition team on the continued effort to reach most vulnerable households like that of Bize and Shimelis.

To date, Growth through Nutrition has reached 2.2 million children under the age of five and provided support to over 20,000 households.