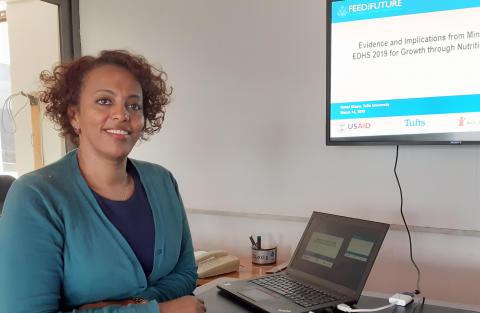 The Ethiopian Demographic and Health Survey (EDHS) has been conducted about every five years since 2000 in Ethiopia to measure health, nutrition status, and population. The survey’s results are vital in maintaining awareness of both national and regional health and nutrition indicators. In between the years when the full DHS is conducted, a shorter Mini DHS  (EMDHS) is sometimes conducted to keep track of key trends with a narrower scope and a more limited sample size.  Recently, a 2019 EMDHS was conducted by the Ethiopian Public Health Institute (EPHI) on a total of 9,150 households.

On September 26, 2019, Tufts University hosted a presentation and discussion on the recent survey results and their implications for the project in an internal learning event at the Save the Children's office. The discussion was attended mostly by advisors from the Growth through Nutrition project.

Abebe Bekele Belayneh, Director of Health Systems and Reproductive Health Research Directorate at the EPHI introduced the study’s methodology including sampling techniques, which as based on the National Population Census, included 305 areas with 30 households in each. The subjects were women between 19-45 years old and children under 5. The study looked at the status of health and nutrition indicators for women in the reproductive age group and children under 5, in relation to their characteristics (education, wealth and residence).

Tufts University Senior Learning Advisor, Rahel Gizaw, also presented some of the key findings of the survey in relation to Growth through Nutrition. Overall, educational progress, level of wealth and proximity to urban areas correlated positively with most of the health and nutrition indicators such as antenatal and postnatal care, birth delivery at a health facility, delivery by a skilled health care provider, and Iron Folic Acid supplementation.

However, the most concerning finding highlighted in her presentation was the status of stunting prevalence in the various regions of the country. Specifically, the Tigray region is experiencing a rise in stunting (a 9.7% percentage point increase as compared to 2016 EDHS) despite the other positive improvements in service delivery indicators in the region and an overall decrease in stunting in other regions (national stunting average increase of 1% percentage point). With this exception, Tigray and Amhara regions have performed well on most indicators compared to the national average whereas Oromia and SNNPR are lagging behind.

Rahel also emphasized the need for further research to understand the cause for the increased percentage points of stunting in Tigray. Other areas for further exploration include why children of older mothers are more likely to receive Vitamin A supplements as compared to those of younger mothers, and barriers for contraceptive use among adolescent married girls.

Lastly, it was noted that in the next coming months, EPHI will make available the final EMDHS 2019 Comprehensive Report containing further analysis on some of the indicators from the EMDHS 2019, along with 10 manuscripts and EMDHS data for public use.